VigorSwitch P2121 is a compact layer 2 high-performance Gigabit smart switch. Designed for the small business. Having 8 Gigabit Ethernet PoE Ports and four combo UTP/SFP ports which can be used with optic fibre SFP modules for uplink connections, provides great flexibility in this switch. The VigorSwitch P2121 provides L2-managed features for VLAN, port security, multicast, and management.
The compact size of the VigorSwitch P2121 allows it to be placed on a desk or it can be rack mounted into a 19-inch rack by using the supplied mounting brackets.

The 8 PoE ports of the VigorSwitch P2121 are 802.3at and 802.3af compliant providing up to 30W per port along with a total power budget of 140 Watts. This is enough to provide power using Ethernet cabling for a number of network devices such as wireless access points, IP phones, and IP cameras. PoE allows installation of these devices where no nearby mains power is available. This results in a reduction in the need for power cables and adapters, lowering the cost of installation.

The VigorSwitch P2121 complies with IEEE 802.2az Energy-Efficient Ethernet to provide power saving. The switch will automatically detect idle clients and cable length to adjust the amount of power required. This green networking feature reduces power consumption.
Selected ports can be switched on and off according to a PoE time Schedule. This feature allows you to switch off devices that are not in use to save electricity or can be used to restart PoE devices.
PoE power is automatically switched off for switch ports that have a non-PoE device attached.

The VigorSwitch P2121 supports both port-based and tagged-based VLANS which can be used to add security to your network and create workgroups within an organisation. This allows the network administrator to control LAN access and also reduce unnecessary network traffic.
Up to 256 VLANS are supported in the VigorSwitch P2121. In addition to 802.1q Tag-based VLANS, Auto Voice and Auto Surveillance VLANS are also supported so that traffic from an IP phone or an IP camera can be identified automatically without the need to specify each of their MAC address. The respective QoS (Quality of Service) policy can be applied easily to ensure the best call and video quality.
Other supported VLAN options included are: 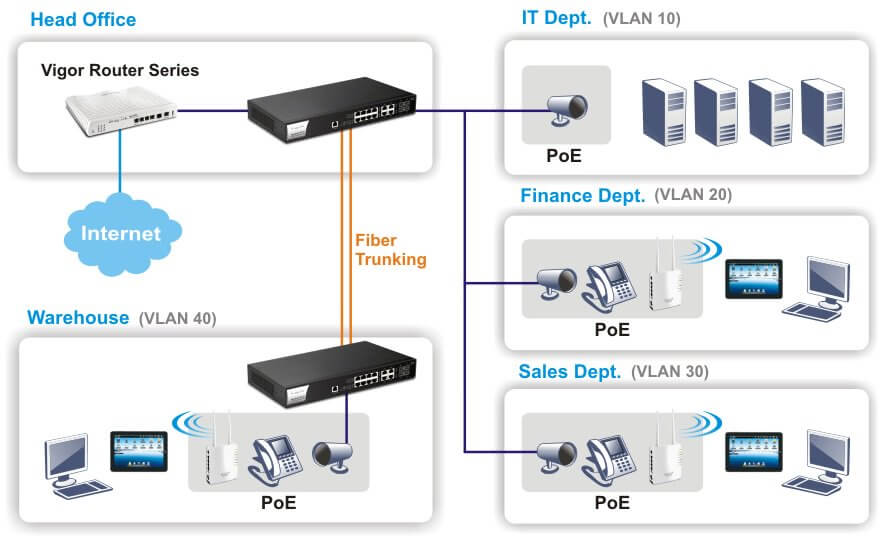 The VigorSwitch P2121 has a number of security features to prevent the local network being overloaded by superfluous traffic. This includes Storm Control to limit the amount of broadcast and multicast traffic on each port, and DoS Defense to protect the network being flooded by malicious traffic.
This helps to avoid IP conflicts on the network by including IP Source Guard, ARP inspection, DHCP Snooping. You can also add Access Control List to filter MAC, VLAN ID, IP, and protocols.

Speed up the network by Link Aggregation

In addition to the 4 Gigabit Ethernet/SFP combo ports on VigorSwitch P2121 for uplink, the switch also supports link aggregation using both static configuration and LACP (Link Aggregation Control Protocol). This provides the network with higher throughput and link redundancy. Up to 8 LAN ports can be grouped using link aggregation to provide high throughput to cascaded switches. Up to 8 Link Aggregation Groups can be configured.

The VigorSwitch P2121 features a brand-new interface design making configuration and management much easier.
The dashboard displays an overview of the system status, usage and power usage of each port as well as other important details.
The responsive web design allows the switch to be monitored through devices having various screen sizes.
The VigorSwitch P2121 can also be managed through the Command-Line Interface (CLI) via Telnet or SSH, as well as SNMP (SNMP v1, v2c, and v3, RMON Group 1,2, 3, and 9 are supported) and Syslog.
Also supported is dual-image with configuration and firmware upgrades by HTTP, HTTPS, and TFTP. The Authentication of management service can be associated with external RADIUS or TACACS+ servers.